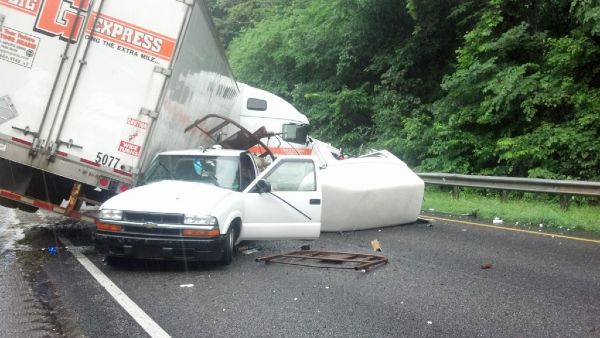 Mike, a 26 year old railway worker was driving a utility truck when his vehicle was rear ended by a fully loaded log truck in downtown Macon.

Mike was sore immediately afterward thought he would be o.k. “My neck and shoulder hurt, but I just thought it was whiplash, so I didn’t even bother going to the ER.” He continued to work for three weeks before going to the emergency room.

By the sixth week after the impact the neck pain worsened and he developed constant pain radiating to his left arm with numbness and tingling in his arm. “I ran out of prescriptions and the Goody Powder wasn’t cutting it anymore”, he said. An MRI showed a disc herniation in his neck pressing on the nerve root. Months of injections and therapy failed to stop the pain, and surgery was done 13 months after the collision.

“I was out of work and having a hard time paying the bills. I was shocked when the insurance adjuster told me that she didn’t believe this wreck caused my injury.”

The insurers for the defendants strongly contested the case due to the driver’s delay in getting treatment.

Mike hired a law firm that he saw on T.V. to fight the claim. The insurance company made a final settlement offer which equaled less than half Mike’s lost wages and medical bills. His lawyer was urging Mike to take the offer, but he sought a second opinion.

Mike hired the Law Offices of Peter Meyer, PC to represent him for his medical expenses, lost wages and pain & suffering. Suit was filed in Bibb County, and his legal team presented evidence of the force of the impact, and how it caused his injury. Evidence was presented from his doctors showing that the driver never had any of these symptoms prior to the collision. Testimony was presented from family and co-workers showing that he never complained of pain or missed work due to a neck injury before this wreck.

Mike wound up winning more than three times the previous “top offer” from the insurance company. “I am glad I called them. We got a fair settlement. The staff was helpful and professional with everything.”